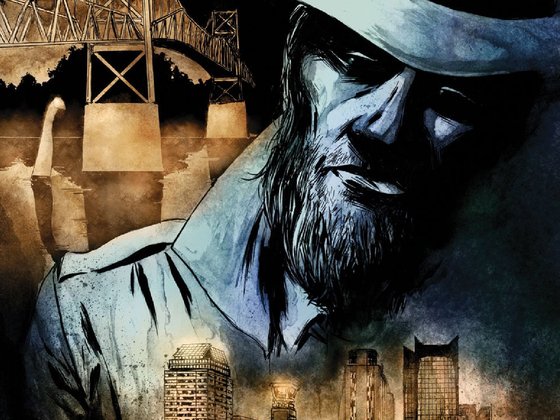 Footprints is the debut comic book from Joey Esposito; resident comic book nerd at IGN. He has written something that is so pulp, it makes pulp look... not like pulp. Dammit, I need to get the hang of that.

Ok, so what happens when Cryptids (creatures that are “hidden” and not proved to exist) come out and let everyone know that they’re real? They become detectives! Ok, they don’t ALL become detectives but Bigfoot, the Loch Ness Monster, the Chupacabra, the Jersey Devil and Megalodon do. Because that’s how they roll. Oh and the Mothman is a woman called Motheresa. She’s the femme fatale ( You’re already pre-ordering it, right?).

But this isn’t a simple Noir Pulp story, oh no! We’ve also got global warming and war mixed in there! The Government doing stuff they shouldn’t! Ok, let me set it up for you: Bigfoot is an old Private Investigator who’s burned bridges and left himself in a miserable state.

A letter from his brother, the Yeti (and you didn’t think it could get better), takes him far north, on the back of the Jersey Devil, into a dank, frozen cave his brother calls home. Without giving too much away, it isn’t a pleasant visit. They soon start connecting the dots, jumping from one clue to the next, uncovering a conspiracy originating from the 1940’s while bringing up painful memories of lost love and failed friendships.

But this is a comic book! Fantastic writing is only half of the story! What about the art?

Jonathan Moore seems to have been born for this sort of book. The use of shadows and grey do more for the atmosphere than any colour palette could ever do with this genre. It has the feel of classic Noir films while still offering plenty of modern feel. Imagine is Sam Spade went looking for a murderer and ended up getting involved with the freaking government. The art is moody, dramatic and doesn't make the subject matter seem silly. A giant shark having a relationship with the Loch Ness monster? That could have been one big cock joke after cock joke but, thanks to Esposito’s writing and Moore’s very fine Noir art, it’s a serious, heart breaking relationship.

And, I have to say, the Jersey Devil is one of the best characters in the book. He may not be likable but he’s pretty freaking great. He’s one of the best slimy anti heroes I've seen in a long time.

I’m very worried about this book, though. I’m worried it will not get the publicity it deserves. I’m worried it’ll end up an underrated spectacular thrill ride like Steve Nile’s “Dead She Said.”

So go and buy this book. Buy it twice. Buy several as gifts for loved ones. Just please, for the love of God, do not let this fade away. Treat it like the Cryptids! Talk about it, take blurry photos of it and post about it all over the internet. You’ll only regret it if you don’t.
Posted by Ninja at 14:59